As an author, it’s hard for me to admit that sometimes a couple pictures will tell a story much more effectively than any number of cleverly crafted words I might conceive.  Hence, this blog post is worth checking out for it’s attached photo gallery of before and after photos of diamonds that have been “fixed” with a laser.  Check it out here…

Here’s an interesting article on the Remington EtronX – a gun that uses no sear pin, and instead substitutes a piezo electric module.  From Popular Mechanics:

Consider it a shot in the arm for factory sporting rifles. Remington’s new Model 700 EtronX centerfire target rifle and pesky varmint bagger is more than just another gun. It’s the opening salvo in what could well be the next revolution in firearms. What Remington has done is take the mechanical trigger and related hardware required to energize and release the firing pin of its standard Model 700 and replace it with an electronic trigger and an electronic, versus the usual percussive, ignition system. Why? In a word–accuracy. In two more words–simplicity and reliability.

On the accuracy side of the equation, the longer it takes between the time you squeeze the trigger and the time the bullet exits the muzzle, the less your chances are for achieving a dead-accurate shot in long-distance shooting. A significant factor in this is lock time, or the interval between the instant the trigger releases the firing pin and the point of sufficient impact of the firing pin to detonate the primer.

In a percussion rifle, the normal lock time is anywhere from 2.8 milliseconds on the fast end up to or exceeding 7 or 8 External appearances aside, the inner workings of the new Model 700 EtronX are nothing short of revolutionary. milliseconds. The biggest variable here is in the trigger mechanism itself. A fast system typically consists of a trigger that pulls out from underneath a sear and releases a striker, or firing pin, which is driven forward by a mainspring. In a slower system, the trigger mechanically releases a hammer that pivots about an arm and reaches up to strike the firing pin, which in turn starts to move and then impacts the primer. A few milliseconds here or there may not seem like much, but when you’re aiming and pulling the trigger, the muzzle tends to move around a bit. All things being equal, shorter lock time reduces off-target barrel movement. As we mentioned, this applies primarily to long-distance shooting. Short- and medium-distance target accuracy remains largely unaffected by lock time.

Another drawback of percussion firing is the harmonic vibrations that the firing pin impact sets up in the barrel. While heavier barrels tend to absorb more of these vibes than lighter barrels, this mild shake can still factor into bottom-line accuracy.

The EtronX system is turned on and off by a removable key located in the grip cap. The key can be removed in either the On or Off position. The trigger is basically a switch that sends a signal to the 8-bit computer tucked inside the synthetic stock. So, in other words, this is the first machine with its brains in its butt. Trigger pull is adjustable from a factory setting of 2.3 pounds down to a half-pound. And, unlike mechanical triggers with friction and wear between moving parts, the EtronX with no moving parts gives you pulls that are smooth and consistent, with 36 percent less travel than the standard 700. Lock time for the electronic firing circuit is slashed to 27 microseconds. That’s a 99 percent reduction compared to the standard 700’s.

Blue Ice will soon be available through the Kindle Select program.  This will make it available at a special low price as well as for rent to Amazon Prime users.  I’m really excited about this as it opens a whole new range of readers to the book.

I anticipate having it setup for Kindle Select by Sept. 1. 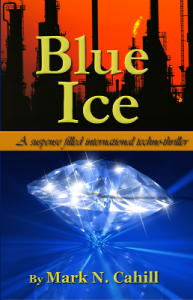 As a benefit of publishing with Createspace, the book is now available on line for you to purchase in print via my Createspace store.

It should pop up on Amazon in the next week or so. Kindle and Nook versions will be available as early as tomorrow.

This is a gangway on a sailboat docked stern.  They drop the anchor off the bow, and then take two spring lines off the rear.  This makes great use of limited dock space, but requires the use of a gangway. I’ve got what I hope will be the final proof copy on the way.  A new cover, and I’ve incorporated the wonderful editing work done by Mary Smucker.  One last read and I’ll release it…finally.

These pictures remind me of the Milazzo, Sicily I remember…

Castello di Milazzo – the castle.  When I was there, they used it to house goat herds at night.

Milazzo – oil refinery as seen from the harborside As the old line from the Bionic Man goes “We can rebuild him, we can make him better than he was.”  The same holds true for diamonds.  The main solution that is employed is diamond drilling.

As any good bride could tell you, there are 4 prime factors in a diamonds value.

Carbon diamond inclusions – the black specs in the image

It’s the 3rd factor that is interesting.  By removing inclusions, the price of a diamond can be improved.  General types of inclusions:

(from Wikipedia – more on inclusions here.)

So the question then is, how to clean up inclusions?  Again from Wikipedia:

The combustibility of diamond has allowed the development of laser drilling techniques which, on a microscopic scale, are able to selectively target and either remove or significantly reduce the visibility of crystal or iron oxide-stained fracture inclusions. Diamonds have been laser-drilled since at least the mid-1980s. Laser drilling is often followed by glass infilling.

The drilling process involves the use of an infrared laser (wavelength about 1060 nm) to bore very fine holes (less than 0.2 millimeters or 0.005 inches in diameter) into a diamond to create a route of access to an inclusion. Because diamond is transparent to the wavelength of the laser beam, a coating of amorphous carbon or other energy-absorbent substance is applied to the surface of the diamond to initiate the drilling process. The laser then burns a narrow tube to the inclusion. Once the included crystal has been reached by the drill, the diamond is immersed in sulfuric acid to dissolve the crystal or iron oxide staining. This process is not effective for inclusions which are diamonds themselves, as diamond is not soluble in sulfuric acid.

Several inclusions can be thus removed from the same diamond, and under microscopic inspection the fine bore holes are readily detectable. They are whitish and more or less straight, but may change direction slightly, and are often described as having a “wrinkled” appearance. In reflected light, the surface-reaching holes can be seen as dark circles breaching the diamond’s facets. The diamond material removed during the drilling process is destroyed, and is often replaced with glass infilling, using the fracture filling techniques described below.

So there it is – the basics of how diamonds are cleaned with lasers.  Enjoy!

I just received the proof copy of the Blue Ice – the new Techno-thriller from Mark N. Cahill (yeah, that’s me).

The book is currently being proofed, then I’ll release it, with both Print and Kindle versions almost right away, and Nook and iBook coming shortly after.